51. Just Beyond the River 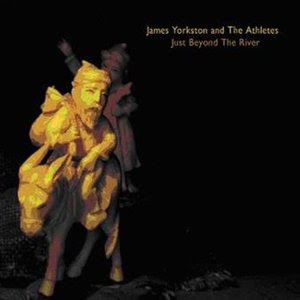 James Yorkston hails from Fife, Scotland, also home to Fence, a musicians’ collective and label borne of Kenny Anderson’s bankrupt record shop.  Anderson has recorded over two dozen albums as King Creosote; but, of Fence artists in the Aughts, it was Yorkston who held the highest profile.  His demo, recorded after a spell with various rock groups, attracted influential DJ John Peel and resulted in a ’01 solo 7” on the Bad Jazz label.  Entitled Moving Up Country, Roaring the Gospel and credited, for reasons unforthcoming, to “J. Wright Presents,” it is a soulful, sleepy shuffle that he reworked for his ’02 debut LP Moving Up Country.  After one more split single and a compilation appearance, Yorkston signed to Domino and issued a bevy of singles and EPs with them before his first full-length.  Yorkston remained part of the Fence community even after signing to a larger label, working with its artists including The Pictish Trail (aka Johnny Lynch, Fence co-director) and UNPOC.  Yorkston’s own work descends from Scottish and Irish folk music, guitar-based but with traditional instruments—whistle, pipes, accordion, fiddle, bouzouki.  His folk-based songs are often slow and deliberate, his voice rarely straying from a narrow range; the result is far from the celebratory jigs and reels associated with the traditional music of Yorkston’s homeland.

Yorkston’s second full-length, Just Beyond the River, again recorded with a loose association of musicians dubbed the Athletes, utilizes stronger compositions and more focused playing for a sound more starkly emotional than his previous works.  On his debut LP Yorkston employed former Cocteau Twins bassist Simon Raymonde as producer; for River, he uses Kieran Hebden, who records electronic music under the moniker Four Tet.  Hebden’s own work incorporates guitar, piano, and other acoustic instruments, and he leaves no trace of synthetics on Yorkston’s album; as with Raymonde the collaboration appears incongruous, but Hebden conjures a haunting, sometimes hypnotic aspect setting River apart from Yorkston’s other Aughts works.  Several songs are skeletal, quiet affairs (We Flew Blind, Hermitage, This Time Tomorrow), and are countered by the swirling, push-and-pull, full-band arrangements of other numbers whose simple details—like the brushed drums in Heron—create both tension and resolution.  Shipwreckers builds to a swell, just as the storm that drives it subjects to shelter near a warm hearth, before flickering out like faded embers at sunrise.  In Banjo #1, Yorkston’s vocal melds with the banjo’s cyclical churn, matching the lyrical tension of a man apologizing to a leery prospective lover for his “need for clamour/my clumsy touch/and Catholic roving eye.”  Two of the album’s highlights are its sole traditional numbers: a variation of the ancient European murder ballad Edward is the album’s most chilling song, the desolate arrangement and Yorkston’s triplicate repetition of the final word of every line creating an unnerving effect; closing song The Snow It Melts the Soonest has a firmer arrangement yet, like Banjo #1, mesmerically blends Yorkston’s vocals with the instrumentation.  Yorkston recorded prolifically throughout the Aughts, and after this second full-length issued three more LPs and a host of singles, EPs, and limited-edition items.  Just Beyond the River and its quietly gripping, tempered undertow is a close contender for the finest among these many releases.

Highlights: Shipwreckers, Banjo #1, Edward, The Snow It Melts the Soonest

Sublime bit: The fleeting, tense half-steps of the violin that press through the between-verse instrumental passages of Shipwreckers.

Read the NOYOUCMON mission statement here.
Posted by noyoucmon at 3:40 AM