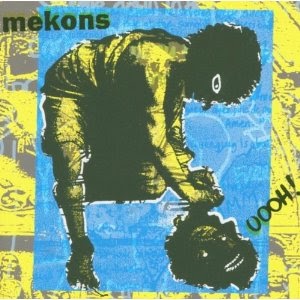 Formed as a punk trio at the University of Leeds in ’77 before a reinvention in the mid-’80s as a more nuanced, expanded unit exploring British folk and American country music through a lens of sardonic and literary commentary, the Mekons have recorded regularly since their inception, with only the Fall matching their continuity and longevity.  Much like the Fall’s Mark E. Smith, the Mekons have demonstrated an acute if sometimes ambiguous socio-political consciousness; for the Mekons, this often operates out of time.  Anyone expecting their fifteenth LP, OOOH!, to be a direct analysis of the new post-9/11 world, then, may be confused to instead find a set of songs that opaquely invoke ritual, myth, and dissent from present-day England to the pagan sects of the pre-Saxon wilds.  OOOH! began as an art show of the same name—the bulk of Mekons are also visual artists—revolving around, well, heads. History and mythology contain a slew of famous heads: the decapitated ones of Anne Boleyn, John the Baptist, and Jayne Mansfield; the allegedly frozen one of Walt Disney; the beguilingly poisonous one of Medusa; and a garden variety of various types of heads—shrunken, floating, missing; decorative heads placed on buildings as sentinels or superstition; the mo’ai stone heads of Easter Island. The songs of OOOH! use these stories as inspiration.

Thee Olde Trip to Jerusalem opens the album with a ghostly intonation of its title’s acronym that sounds like a wolf’s howl.  Clattering percussion strikes up and Jon Langford directs a call-and-response group vocal.  “The sword is sharp/the arrow swift/the witnesses all seeing,” he sings, the rough-hewn arrangement suggesting a band of battle-worn troubadours heading for their final confrontation.  The possibility of death is clear, of it resulting in “two brass farthings on my eyelids,” as sung in This Way Through the Fire, but as members of the Commonwealth-era radical groups listed in Thee Olde Trip to Jerusalem would tell you, such is the risk of fighting for one’s cause.  Much of the album addresses the solitude and introspection possible in the midst of such communal activity.  In Bob Hope & Charity, the ragged-band sing-along continues although the story is of a flagging comrade hoping for telepathic connections with his mates.  Tom Greenhalgh sings a version of traditional folk song Lone Pilgrim, about a private epiphany about redemption of the righteous.  Susie Honeyman’s sad violin accompanies Sally Timms as she admits on the album’s quietest track, Hate Is the New Love, “how we still love the war” and “When we say we’ve had enough/We know we really want more.”  Winter, with a largely acoustic but boisterous and ramshackle arrangement featuring harmonica, fiddle, Turkish saz, and prominent tambourine, shows optimism for calmer times after a pagan winter spent naked and drunk “in the belly of the beast.”  The first verse of the Greenhalgh-led Only You and Your Ghost Will Know addresses a lonely traveler whose friends have died; in the second verse, he himself has frozen to death on the road.  The album’s downbeat denouement, Stonehead, closes the proceedings with a reminder that one day, like the frozen traveler, “our memory will vanish from the memory of the world.”  Its concepts may be less immediate than those of other Aughts-model Mekons albums (see #83 and #104), but the rewards of OOOH! are lasting and it is the always engaging group’s strongest album of the decade.

Highlights: Thee Olde Trip to Jerusalem, Only You and Your Ghost Will Know, Winter, Bob Hope & Charity

Sublime bit: When the title chorus of Ghost kicks in after the group vocal of “First the chill and then the stupor/Then the letting go.”