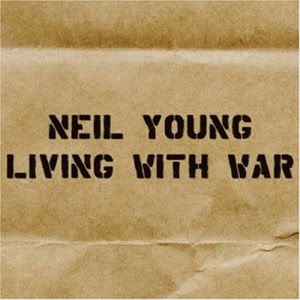 It was easy during the Aughts for even dedicated Neil Young fans to lose interest.  After his strong ’00 folk-rock outing Silver & Gold (see #75), Young released a stretch of work more ignominious than his much-maligned ’80s output.  The live Road Rock Vol. 1: Friends & Relatives (’00) was his fourth concert set in ten years, its arguable redundancy made worse by middling performances.  His long-awaited studio debut with Booker T. & the M.G.'s, Are You Passionate? (’02), was a passionless assortment of half-baked blues and painfully weak vocals; next came Greendale, a tedious 78-minute concept album short on melody that Young nonetheless felt warranted two separate editions.  During this parade of lackluster new material, Young waffled to the point of absurdity on his plans to release his long-promised Archives box set.  By the time the inoffensive but forgettable country-rock outing Prairie Wind arrived in ’05, NOYOUCMON had decided to retire from buying Neil Young albums.  Young’s next project proved so provocative, however, that even the most jaded fan was hard pressed to ignore it.  Angry to the point of despair about the seeming futility of the wars being fought in Afghanistan and Iraq, Young found inspiration in a newspaper article about in-flight surgery on military aircraft.  Within a matter of days, he’d written an album’s worth of material whose immediacy—in both speed of recording and in tone—made Living With War the most galvanizing example of music as news since Young recorded the song Ohio with Crosby, Stills & Nash not three weeks after the Kent State shootings in 1970.

The material’s sound hinges on aggressive, metallic guitar, making for Young’s most raucous LP since Mirror Ball, his ’95 collaboration with Pearl Jam.  Only bassist Rick Rosas and drummer Chad Cromwell accompany Young’s guitar on the core tracks (trumpeter Tommy Bray joins on two songs).  A week after recording, Young overdubbed a 100-voice choir on each song, amplifying the united-we-stand communal sentiment of the lyrical themes.  (Young released a separate edition of the album featuring the original unmixed tracks without the choir, titled Living With War—“In the Beginning.”)  The album is an unapologetic vivisection of the Bush administration and the mid-Aughts home-front climate; as shown in the ’08 tour film CSNY/Déjà Vu, its politics drove conservative fans to wish physical violence against Young.  The songs explicitly address the War on Terror, most famously in jaunty singalong Let’s Impeach the President with its strategic juxtaposing of self-contradictory soundbites from Bush speeches.  More than one song addresses Bush’s disingenuous ’03 “mission accomplished” speech.  Lookin’ for a Leader examines the possibilities for Bush’s replacement, presciently mentioning Obama nearly a year prior to his campaign announcement.  Angriest is The Restless Consumer, a gush of emotions from frustration with advertising fatigue and American ostentation versus Mideast poverty to post-9/11 fear and anxiety (“Don’t want no damned jihad/Blowin’ themselves away in my hood”) while suggesting that not all wartime problems are the enemy’s fault (“But we don’t talk to them/And we don’t learn from them”); each verse ends with a repeated chorus of “Don’t need no more lies.”  Those believing the album is anti-American need look no further than Families; its final chorus of “I just can’t wait to see you again in the USA” (recalling his ’80 song Hawks & Doves) is a declaration of the proud patriotism that Young, a longtime Canadian expatriate, feels for his adopted country.  While its subject matter ensures that many will never accept it as a valid artistic statement, Living With War was, after over five years of dwindling returns, much-desired testimony that Young’s creative well had not run dry.

Highlights: Families, The Restless Consumer, Lookin’ for a Leader, Let’s Impeach the President

Read the NOYOUCMON mission statement here.
Posted by noyoucmon at 1:34 AM